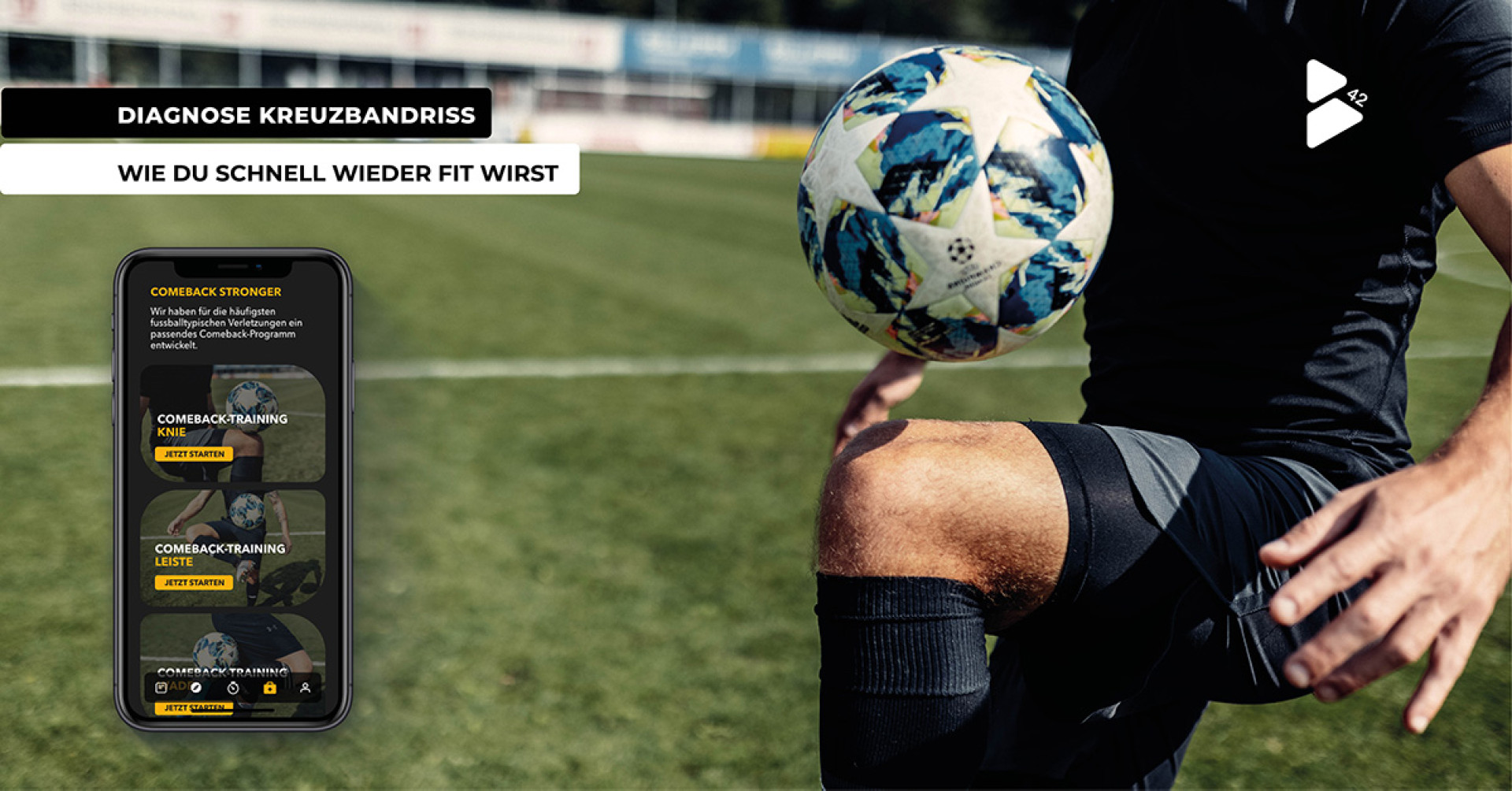 What to do now and how to get fit again quickly

A crack in the knee, a pop or even a loud bang. That moment when you realise something has happened.

These are not pleasant seconds. The oscillation between hope and fear. What is broken? Hopefully it's not a torn cruciate ligament!

Everyone who is affected knows this feeling. Not a good one, that's for sure. But what now? First of all, it is important to refrain from sporting activities immediately. An easy-to-remember basic formula before you know for sure that you have suffered an injury is the "PECH rule": Rest. Ice. Compression. Elevation.

Even when following these steps, the first symptoms will appear. Swelling forms in the knee, which restricts movement. The joint can no longer be stretched completely.

Acute pain sets in, which disappears again at first and can be felt again with further strain. Slowly, a haematoma may form.

Once the diagnosis of a torn cruciate ligament has been made and the first shock has been digested, the next one has to be dealt with. Once again, terrible thoughts flash through your mind.

Can I ever return to the football pitch? Is my career over now? 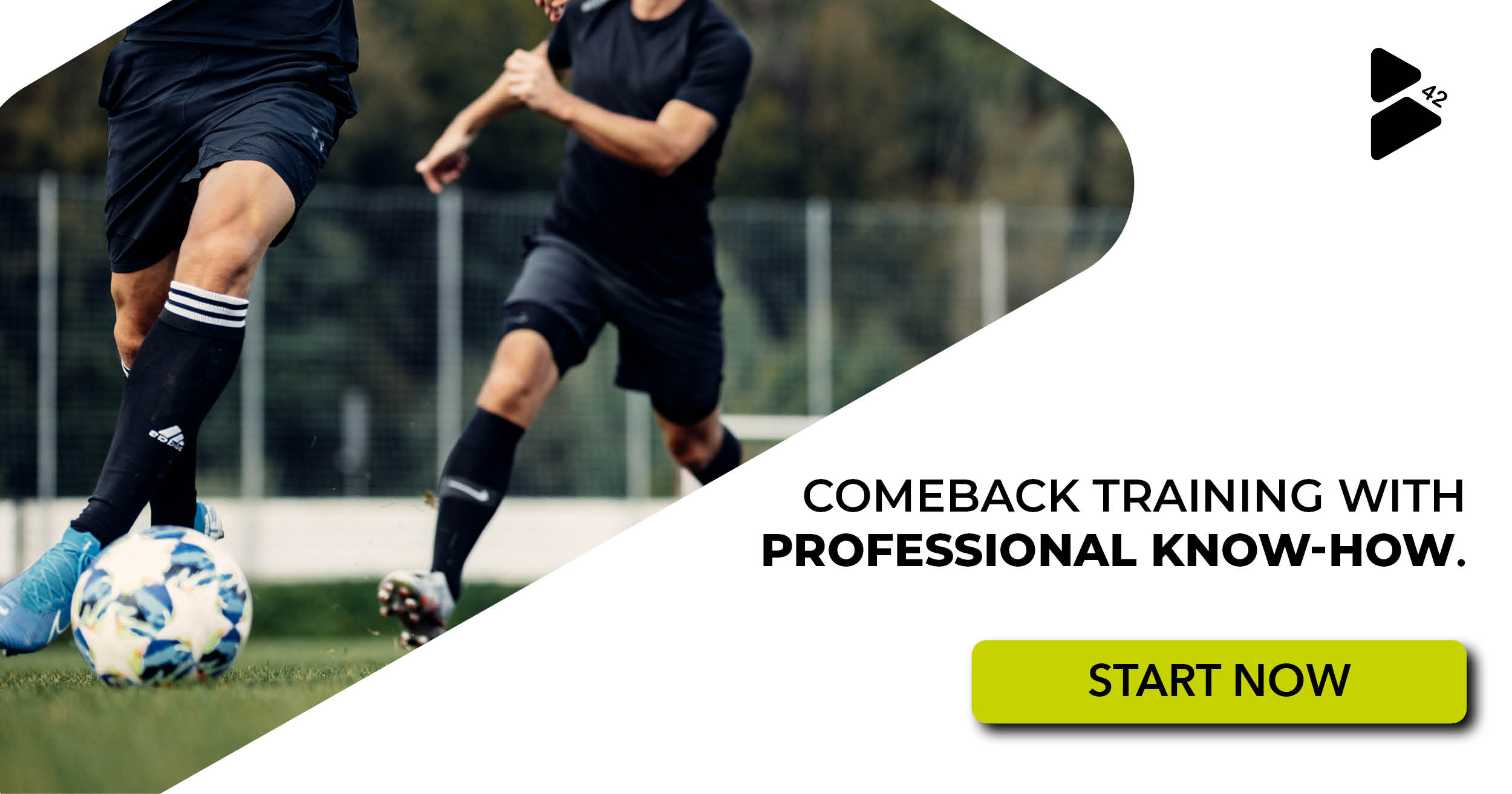 Unfortunately, a cruciate ligament rupture is not uncommon in football, but one thing can be said on the basis of experience:

No, the career is not over! At least not necessarily.

What is clear, however, is that you are in for a long break. Football is out of the question for the time being.

According to the available data, the average downtime in professional football is eight months. In amateur football, convalescence takes longer due to the often less intensive rehabilitation. A recovery period of up to one year is not uncommon. During this mentally and physically difficult time, there will be one or two setbacks.

An operation can also hardly be avoided for young people and athletes if you want to restore your freedom of movement as well as possible. This applies to both amateurs and professionals.

What now: surgery or not?

"A conservative return to football, i.e. without surgery, is out of the question in most cases," says Professor Dr Stefan Hinterwimmer (OrthoPlus Munich) in his interview with B42. He is a renowned specialist in the field of cruciate ligament injuries in football, with whose help a number of top athletes have made it back onto the pitch.

Nevertheless, successful regeneration is also possible without surgical intervention. There are examples of conservative treatment methods from the Bundesliga.

And especially in the case of amateur players who voluntarily subject themselves to less stress, surgery may not always be necessary. Ultimately, there is no patent remedy. Each cruciate ligament injury is very individual and must therefore be considered on its own merits. 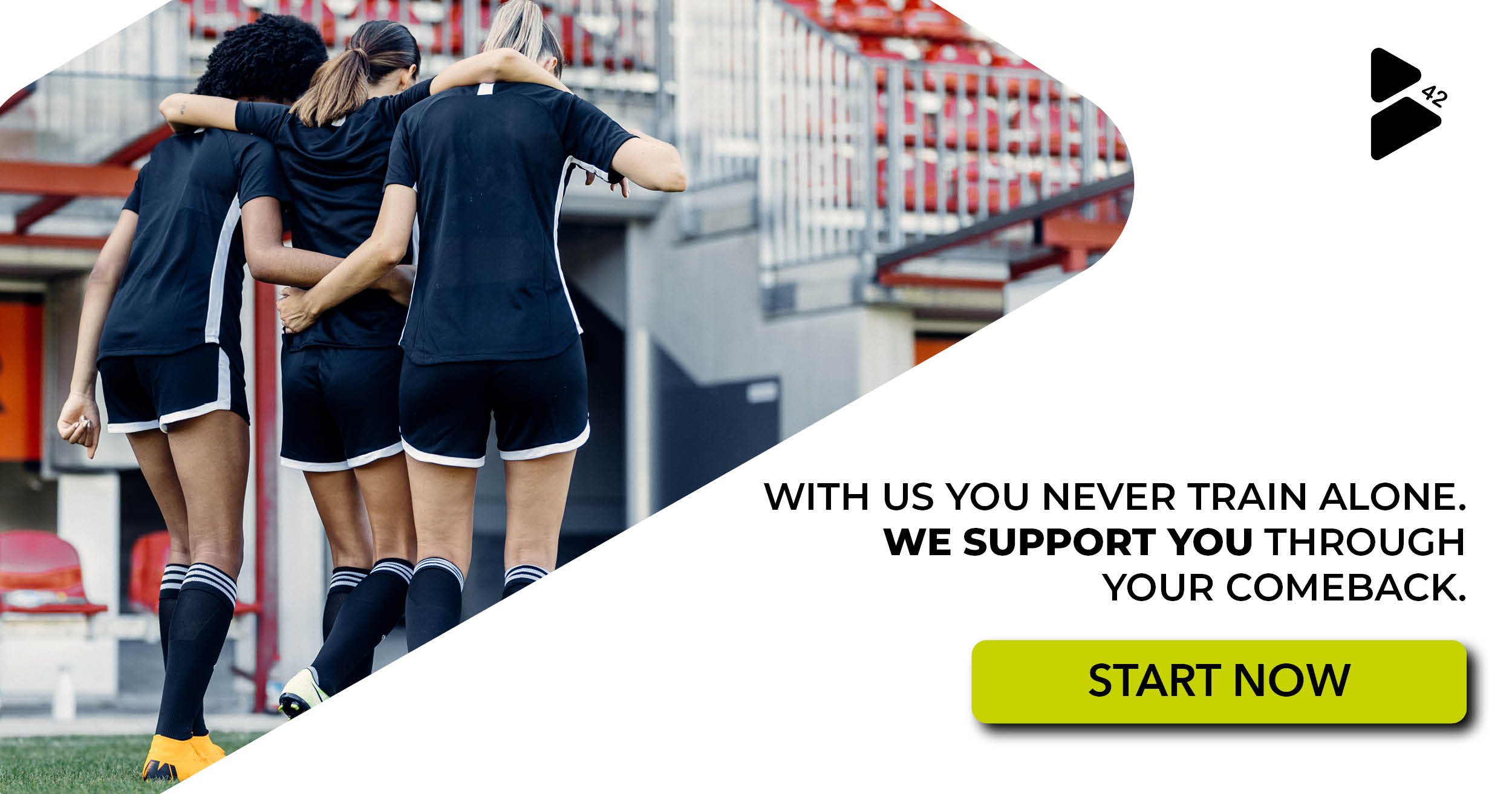 Extensive rehab is the most important thing

No matter what you decide, the most important thing is intensive and disciplined rehab.

Patience is essential during this long break. Often, players who return too quickly suffer a further ACL injury.

To support you during this long and arduous time, we have developed our Comeback Training section. With it, you can work on your comeback every day via app.

Together with experts from competitive sports, we transport the rehabilitation training of professionals to the amateur sector. We have compiled this know-how for you and packed it into a guide. Here you will find many tips that could be helpful for the following knee joint injuries: 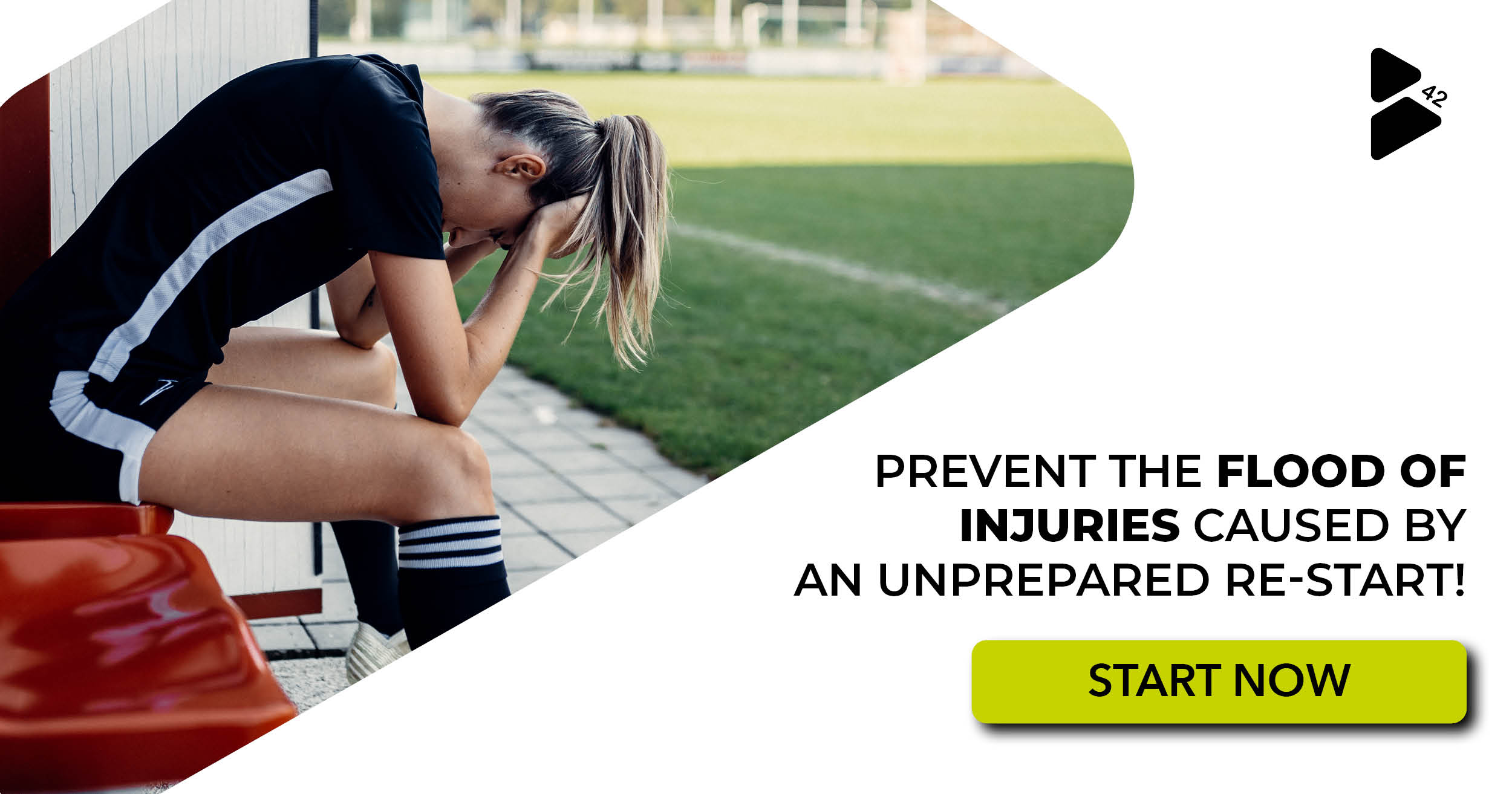 What happens if the cruciate ligament in the knee tears?

Of course, the first priority for athletes is to avoid serious injuries.

Based on many experiences, there are now several training options to prevent knee ligaments. A cruciate ligament rupture is often caused without direct contact with opponents.

If the body is not sufficiently prepared for the fast and often unexpected movements, this bang, this crack, often occurs, which penetrates the memory of the affected person in such a lasting way.

To avoid having to experience this terrible feeling in the first place, there are some suggestions and tips.

A crucial component of prevention is the specific training of changes of direction.

According to statistics, football players complete about 700 changes of direction per game. Improved agility is therefore a decisive factor in preventing serious knee injuries.

It is important to note that you do not only train acceleration, but above all deceleration. This is where the knee, ankle and hip have to withstand great forces. The risk of overloading increases many times over.

By the way, balanced training should not be neglected in the first few days after the injury. This applies to both surgery and conservative treatment.

The better the condition of the muscles and the tendon-ligament apparatus, the faster the rehabilitation.

In addition, orthopaedic surgery is always associated with a loss of strength and functional capacity; the initial level largely determines the condition afterwards.

You can find out what you can do in the article "Prehabilitation".

You are not alone!

Of course, even the most exemplary prevention is no guarantee of avoiding a cruciate ligament rupture. It is not without reason that a rupture of the anterior cruciate ligament in the knee is one of the most common serious injuries in football.

However, targeted prevention certainly reduces the risk. However, if you do suffer a loud bang, know that you are not alone!

You are not alone!

Many specialists and physiotherapists have specialised in such injuries. They have extensive experience in the field of knee ligament injuries. A full recovery may be difficult, but it is by no means impossible.

We hope to be able to give you a small guide here to find important tips in every phase before or after the injury. 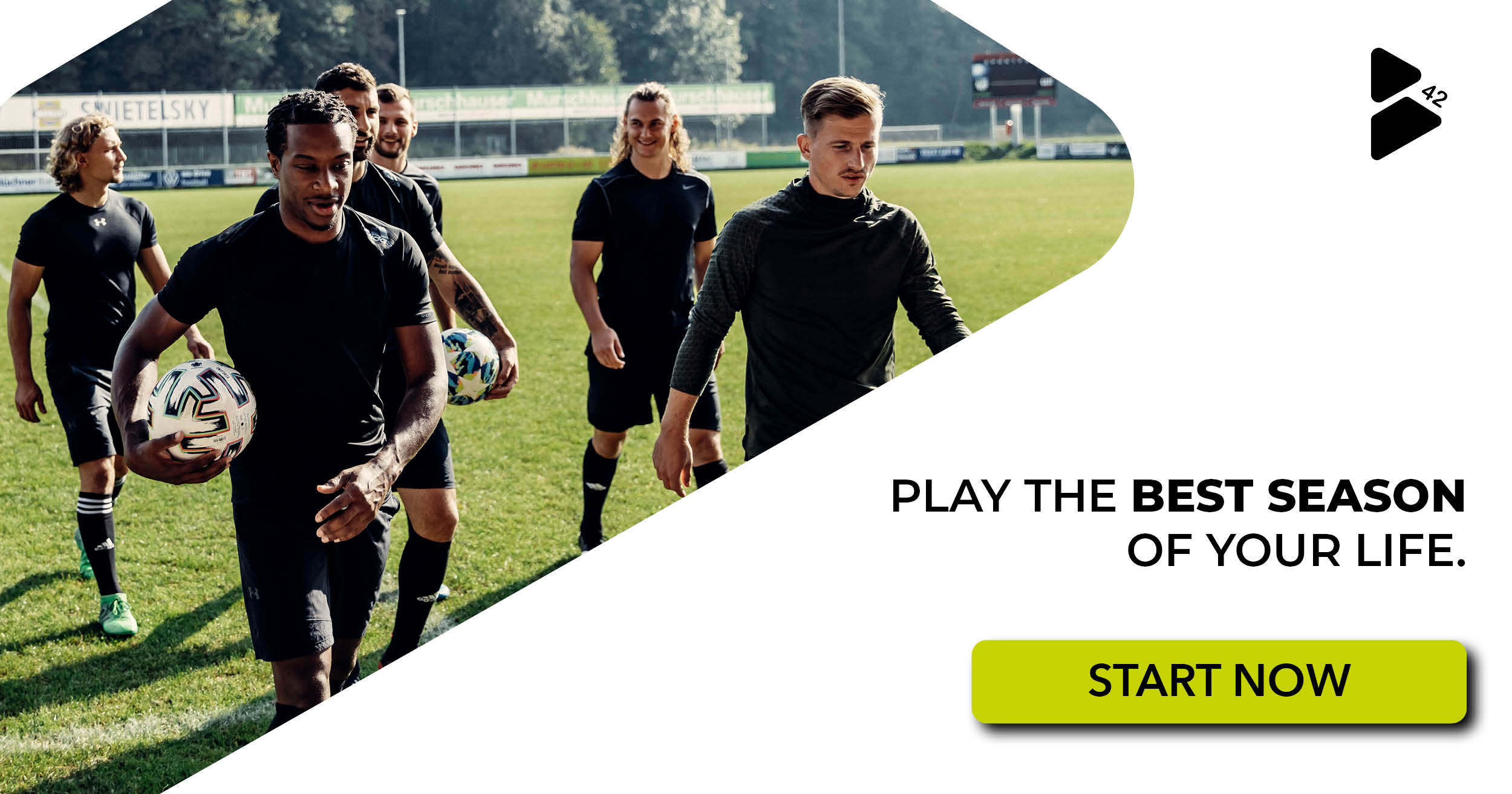 We work hard every day to be the best solution and the best support in achieving your goals.  In the process, we have already achieved a number of milestones.

Get the App now: